The classic chassis arrangement has remained the same to this day: In the floor standing loudspeaker Ergo 690 DC the tweeter and midrange systems are at the top above a powerful bass with 2 x 200 mm woofer chassis. Thanks to the front fire bass reflex system it can easily be positioned near the wall. 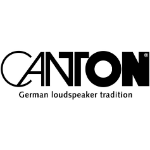